This year at work there was a contest to make the best ornament for the Christmas tree.  We, the IT Department, almost never participate in these activities.  Well, this year we did.  At work I was shown a star cut from a computer motherboard by Robert.  Amanda asked, “Hey, can you put lights on this?”  I said “Yes, I can use an Arduino”.  I took the star home to made a prototype. 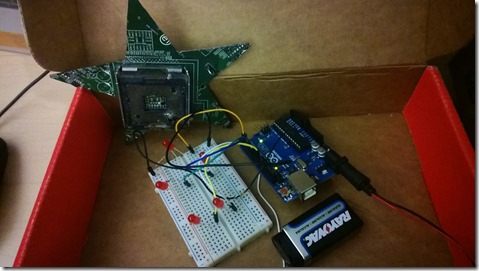 The prototype took a couple hours to cobble together and program.  The program makes the lights dim, get brighter and blink using an Arduino UNO some LEDs and resisters. I brought this back to work and everyone liked it.  A few more holes were drilled and given back to me with a CPU glued into the socket.

Below it he back of the ornament I ended up with…

The finished ornament!  There was no hole for the LED on the leg with the power plug, so I brought the LED around to the front of the star. 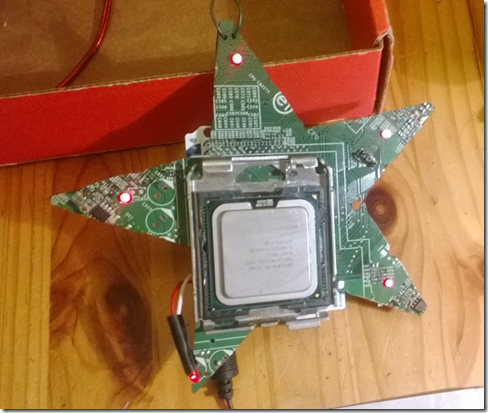 My workstation on the kitchen table with a $5 soldering iron.

The ornament did not win the contest at work.

This entry was posted in Maker Faire and tagged arduino, Make, programming. Bookmark the permalink.

One response to “Arduino Holiday Star”